The 10 Commandments of Social Media Use

Should the Media Add Disclaimers to Photoshopped Images? 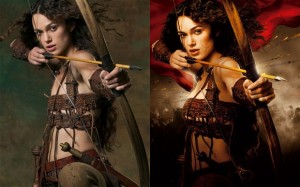 We’ve all been there—standing in front of the mirror, picking at our appearance with a critical eye. Even the most self-assured women and girls scrutinize themselves with apprehension, often disappointment. Arms? Stomach? Nose? Legs? Eyes? Self-assessment can leave us feeling reduced to a series of checks on a long list. For girls and women, that pervasive feeling of physical inadequacy is familiar, despite all the accomplishments, friends, family, and successes that may surround us. A negative body image is one of the biggest contributors to low self-esteem. The American College of Obstetricians and Gynecologists reports that 54% of American girls and young women ages 12-23 are unhappy with their bodies.

Many factors contribute to low self-esteem. Problems with school, work, peers, and family (and we all have some of those problems some of the time) can negatively affect the confidence of women. Girls are especially vulnerable to low confidence throughout adolescence and into early adulthood.

Although this may seem like a common, shared experience or just another “phase” of growing up, low self-esteem can have detrimental effects on every aspect of your life. Low self-esteem can cause you to lose confidence in your ability to do well in school or work, explore new interests or passions, and feel unworthy of respectful, caring treatment at work, in friendships, and in romance. Low self-esteem devalues your view of your own potential, which can cause you to avoid stepping up to life’s exciting – and sometimes scary – challenges (eg, fear of applying to a prestigious university, accepting a disrespectful romantic partner, reluctance to try a new job, a new city, a new language, etc). The consequences of “living too safe” can limit the course of your life.

Negative body image is one of the leading reasons for low self-esteem. Girl Guides UK surveyed 1300 women ages 7-21 and found that 80% felt that women’s bodies are heavily scrutinized and discussed in both their own social networks as well as in the media. In addition, 75% felt that men expect real women to look like the women represented in the media. That’s especially unfortunate, sincemany of those images of women are literally unattainable. TV shows, films, music videos, and especially ads are filled with images of digitally altered women.

Although the majority of digital scrutiny falls on women, there are unattainable body images for men, too, causing the highest ever rates of steroid abuse and eating disorders in teen boys.

The pressure extends to social media, fueled, in part, by the fascination with selfies. Popular apps can digitally alter your selfie, reconfiguring your facial features and skin tone for symmetry and balance, and adjusting the lighting. Children aren’t immune to the pressure, either. There was speculation that pictures of Prince George, now 6 months old, were photoshopped on his recent trip to Australia with his parents.

It’s bigger than just the photos. The photos are posted with the desire to receive approval from both friends and strangers. While it’s always nice to have the support of friends, the continuous need for external approval diminishes our ability to find our own self-worth.

This cookie-cutter image largely ignores (at best) and condemns (at worst) the beautiful variety of colors, shapes, ages, and stages women and men come in. Even worse, this focus on our exteriors (and our posteriors!) oversimplifies us and reduces us to the sum of body parts, discounting all the parts of us that are of REAL value – what’s on the INSIDE!!!

What can we do? Put pressure on companies to provide realistic images of real women in their ads. The models in ads don’t even look like themselves on the other end of production. Their eyes and chests are enlarged, while portions of their thighs, stomachs, and arms are erased. A few celebrities have been brave enough to buck the trend, posting real pictures of themselves to go alongside overly-retouched photo shoots and ads. American Eagle’s Aerie, in a recent campaign, embraced the different body types of young women and explicitly stated that no model has been airbrushed. Instead, they proclaim, “The real you is sexy”. What a great start! Real women echo these feelings. The Dove Global Study says 91% of women ages 50-64 feel it’s time to change our views of women and aging.

Recognize and call out unrealistic images of women in the media. A study at the University of South Florida found that when images of models had disclaimers that said, “Retouched photograph aimed at changing a person’s physical appearance” or “Warning: Trying to look as thin as this model may be dangerous to your health,” it gave women a sense of distance from the images and they were able to consciously recognize the false image portrayed in advertisements. Without these warnings and admissions of truth, women and men consuming media images aren’t consciously aware of just how unrealistic these standards are. After all, the National Association of Anorexia Nervosa and Associated Disorders has found that less than 5% of women naturally possess the tall, thin body type which is overwhelmingly featured in the media.

Buy from brands that embrace a wide range of feminine and masculine styles. A little research goes a long way! Supporting companies whose advertising campaigns are aimed at increasing women’s self-esteem instead of promoting anxiety sends a strong message.

While companies will still continue to use Photoshop, we all can do a better job finding balance between looking like our best selves and looking like someone completely different. We support consumer awareness, using photo credits that mention when photos have been retouched.

Embrace the many kinds of beauty in our everyday lives. We make a difference through every interaction with other people. Go beyond the superficial. Get to know people on a deeper level. Instead of focusing only on someone’s weight loss, compliment someone on their intelligence, their kindness, their humor, and how healthy they look. There is so much more to us than our appearances!

Permanent link to this article: https://www.girlsrespectgroups.com/media-add-disclaimers-photoshopped-images/