Self-Respect For Children: What Is It?

Teaching Self Respect Through Clothing Choices

Respect is a foundational issue, especially for teens, who are at a formative time for self-concept. We need to develop a healthy balance of respect for self and respect for others. And while our focus is on children and teens, much of this applies directly to adults too.

How Are Bullying And Respect Related?

The longer my team and I worked on bullying prevention, the more clearly we saw that underlying all bullying is a lack of respect – for yourself and for others. Kids [and adults] with a strong sense of self-respect don’t need to put others down. Kids who respect themselves don’t seek the friendship of bullies. They won’t stand by and watch others being bullied, either. Strongly anchored self-respect helps kids be resilient when other people act badly towards them. Nobody likes to be on the receiving end of unkind or unfair bad-mouthing, but a person with a strong sense of self-worth is more likely to let it roll off his or her back and less likely to feel the need to respond with words, fists, knives, or guns.

Inspired by understanding this connection, we dug further and began to focus our preventive efforts even earlier. How could we stabilize kids’ self-respect at an earlier age? 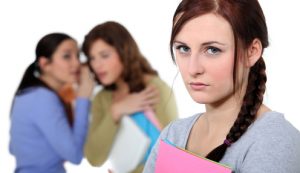 Respect drives many of life’s important decisions. Respect influences the friends we choose. A teen with shaky self-respect will choose very different friends than a teen with strong self-respect. Parents often recognize when a child is surrounding herself with the “wrong” friends, but we misunderstand the cause and effect. We often ban the friends, thinking that if we remove the child from the “bad influence” her behavior will improve. The problem is much more than just the behavior, but because the behavior is the most visible thing, that’s often where parents focus. Unfortunately, it’s the child’s underlying lack of self-respect that drives the friend selection in the first place.

Banning the friends usually results in the child sneaking around to see the friends, which creates two new, genuinely dangerous problems. Now my kid’s lying to me and I don’t know where she is when she goes out – a really serious safety issue. Equally bad, it creates the precedent of my teen lying to solve a conflict with me, which can create a cascade of other related problems. Frankly, the least problematic response my child will likely choose is for her to find an equally “bad” set of friends to replace them with. Back to Square One, and I still haven’t done anything to stabilize her weak self-respect, which was the original problem.

Respect also influences how we approach school and work. Do we show up physically? Do we show up mentally? Do we approach school and work with an open, inquisitive spirit? Do we bring our best? The teen years are not always known for commitment to academic achievement, but a kid grounded in self-respect is much better equipped to focus and work harder to improve her skills and marks when needed. Even though my daughter’s favorite “class” in grade 12 was her first period “spare” [no class], she rose to the occasion and improved her grades when she knew colleges were looking.

Respect influences the challenges we accept or avoid. Self-respect encompasses the strength to feel you’re still worthwhile, even when you don’t feel completely capable, knowledgeable, or confident. If our self-respect is small or shaky, we end up needing to stay within a very small comfort zone, and we’re always trying to support and prop ourselves up. We need an endless amount of emotional propping up from other people in our lives too.

Lack of self-respect undermines our resilience. At every stage of life, we need resilience to help us bounce back from life’s unexpected side trips and from our inevitable mistakes. Low self-esteem is a lifelong adult risk factor for depression, and depression is both a cause and an effect of lack of resilience.[1] Nathaniel Branden, a specialist in the psychology of self-esteem, calls positive self-esteem “the immune system of the spirit.”[2]

Lack of self-respect limits your choices and can keep you living in a very small world. We can be unwilling to try new things – a new language, a new job, a hard biology class, a new romance, a new city – or lack the courage to break away from bad relationships or bad jobs. These things are hard enough to do even with solid self-respect. Our fear of looking different, uneducated, stupid, or awkward can keep us living inside a constrictingly small circle.

We may fail to notice a lack of self-respect in preteens or teens while they’re still largely under adult supervision. But when they step out into the real world as young men and women – into their first jobs and apartments, and life in college or university – look out. The ability to make good decisions is so seriously compromised in these young adults with poor self-respect, they’re not even aware of the damage they’re inflicting on themselves. We’ve seen scary examples: a young woman at college made a porn movie of herself in her dorm room and posted it to the Internet. Then she showed it to friends when they dropped by, asking, “Do you like it? Do I look good?” She obviously had no idea about the emotional and potential physical danger she was putting herself in, or the long-term damage she was inflicting.

That’s the same problem that led to Tyler Clementi’s death [Tyler Clementi was the 18-year-old freshman at Rutgers University who committed suicide at the end of his first month of college after his roommate videoed him having a sexual encounter in his own dorm room and streamed it live to the Internet]. The problem here: kids’ lack of respect for themselves and for others. Kids who don’t know the boundaries for the appropriate treatment of others aren’t going to suddenly “get it” when they move into a college dorm with virtually no adult guidance. There’s danger ahead – and they can’t see it coming. In addition to the wrong and cruel-hearted way they treated Tyler Clementi, I’m sure the college kids who filmed him had no inkling how profoundly and irrevocably their lives would change in the instant following their bad decision.

Carry that type of behavior forward a few years and there’s “Lack Of Self-Respect: Las Vegas.” The owner of the Bunny Ranch Brothel, a legal brothel near Las Vegas, boasts that 1,500 women a month apply to be prostitutes there; even more during the recent economic crisis. How have women so lost their way that so many consider prostitution to be a viable, even a desirable, career objective?[3]

Today’s young women get role model images from music videos, where half-naked women are men’s accessories. Girls and women need to be the central characters in their own lives, not background players in the lives of others. Boys and men need to have valuable, self-fulfilled lives, too, but not at the expense of women. Strong self-respect helps you feel valuable in jobs and relationships, confident to grow into new skills as needed, and capable of recognizing when to say “No.”

Permanent link to this article: https://www.girlsrespectgroups.com/bullying-respect-whats-the-connection/