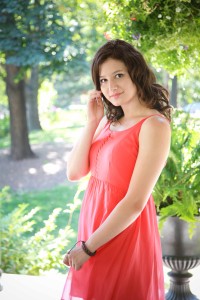 Bianca Pisciola has the looks, intelligence and drive to make it in TV, and it’s working for her. The 17-yr old has already appeared on shows like Degrassi: The Next Generation and made-for-TV movies. But it’s not enough. She wants more. Much more.

What she wants is for all young women to recognize that TV shows and ads are an illusion. They may be fun to look at, but they’re not real – especially not reality shows. Sadly, she says, a lot of young women don’t know the difference.

“If you’re reading a fiction book, you know it’s fiction,” she says. “You can’t think this is a real book. But we don’t make this distinction with TV.”

“Most of the time the people on TV represent a small percentage of what the world looks like,” she says. “I want to turn on the TV and see my cousin, my friend and my sister.”

To her, this is a public health concern. Many tweens and teens measure themselves against celebrities. When TV shows and ads depict perfection, no one can measure up. A young woman (or man) can develop a sense of inadequacy that can evolve into a mental health issue or an eating disorder.

She’s seen it happen. She remembers girls at her middle school telling each other to chew and then spit out their food. That way they could taste it, but wouldn’t gain weight (or benefit from any nutrition). She recalls others starving themselves for bikini season.

“I didn’t realize what they were doing was a disease,” she says. “We are normalizing something that people really need help for.”

Bianca’s not just talking about it; she’s doing something. “What we can do about it is get ourselves out there,” she says. She’s started a website and movement called One Silver Lining. The website showcases images of diverse young women of all shapes and sizes.

She knows from personal experience that young women benefit from peer support. The website welcomes teens’ personal stories and struggles, creating a larger circle of friends.

“When you need to talk to someone, you’re not going to go to the people you’re told to go to, like the guidance counselor,” she says. “No, you’ll go to friend. It’s teen girls helping teen girls.”

Bianca reached out to us at Girls’ Respect Groups because we share this belief in the power of young women to help each other. In fact, our motto is “Girls Helping Girls”!

Permanent link to this article: https://www.girlsrespectgroups.com/one-silver-lining/